PrimoCache is a software caching solution that cooperates with system memory, solid-state drives (SSDs) and flash drives to accelerate relatively slow storage devices. It transparently stores disk data into faster cache devices such as system memory and SSDs, so that future read requests for those data will be served directly from the cache and be faster. Thus access time will be reduced, showing a great improvement in the system reading performance.

What It Can Do

PrimoCache is powerful and flexible, and able to be easily adopted in a very broad application scenarios and fields. It can solve the problem of read/write performance bottlenecks in personal computers, workstations, and small to large servers. It can help persons who are enthusiastic to improve boot and load times, working performance, gaming experience, system responsiveness, etc. It can also help persons who want to reduce writes and wear on SSDs and extend their lifespan.

The following is a simple list of scenarios for which you may use PrimoCache, but not limited to these scenarios.

Unlike level-1 cache which cannot keep cache contents on reboot, level-2 cache is able to retain its cache contents across computer reboots because of the persistent nature of storage devices. This avoids fetching often-accessed data again from slow disks each time computer boots up. Thus level-2 cache will remarkably reduce boot-up time and speed up applications for those computers which install mechanical hard disks.

PrimoCache also supports write-deferred caching mode, which executes write requests on the cache first and synchronizes data from the cache to the disk after custom delays. Therefore write requests can be responded and completed very fast, greatly improving the disk write performance.

PrimoCache fulfills an intelligent cache replacement algorithm which optimally determines cache blocks needed to be discarded to make room for new data when cache space is full. This cache algorithm combines two normal algorithms which are Least Frequently Used (LFU) and Least Recently Used (LRU), and provides a better cache hit ratio. It is self-tuning and requires no user-specified parameters.

PrimoCache allows multiple cache strategies and flexible configurations. It is implemented in Windows kernel level and is transparent to other applications. Therefore no application or system changes are required for this caching solution. With PrimoCache, you can easily setup caches for local disks and speed up your computers.

One of the PrimoCache's core components is a storage class filter driver which resides in the storage stack, intercepting I/O requests for data on disk. If requested data is contained in the cache, this request can be served by simply reading the cache, which is comparably faster. Otherwise the data has to be fetched from disk. Hence, the more requests can be served from the cache the better the overall system performance is. 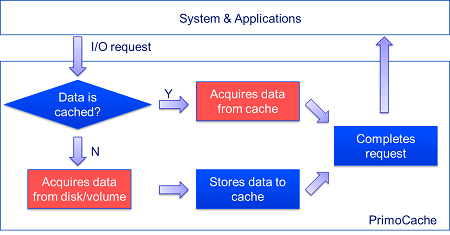 Why do we need PrimoCache since Windows has already implemented a file-system level cache?