With cheaper and cheaper RAM, more and more people would like to install 4G or more RAM for their desktops or laptops, trying to obtain higher computer performance. However because of the limitations of 32-bit IBM PC architecture, to access full 4G physical memory or more, the CPU processor must support Physical Address Extension (PAE), as well as the North-bridge Chip must have the Memory Remapping feature.

Even the hardware has enabled these features, the operating system may still constrain the full use of the large memory. The following table lists the maximum memory supported by different Windows versions from Microsoft.

* Total physical address space is limited to 4 GB on these versions of Windows.

The following demonstration shows how to enable and use OS Invisible Memory. The computer used in this example has 8GB RAM installed and the OS is 32-bit Windows XP. Use Windows Task Manager to take a look on the information of the physical memory. The total memory visible to OS is 3582MB and the available memory is 2975MB.

If your computer or OS doesn't support PAE, this checkbox is automatically disabled and looks grey. 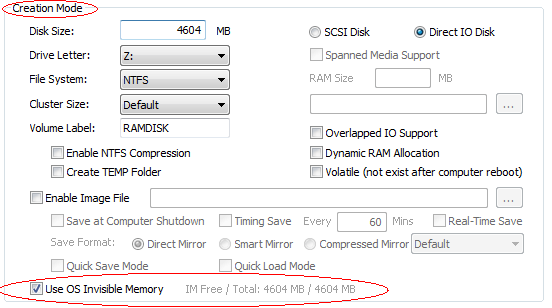 Step 3. Set other properties and then press the Add button to create a new ramdisk. (see how to add a ramdisk)

Now a new disk which utilizes the Invisible Memory is created. Let's check the available physical memory again. It is 2963MB, almost same as before the creation of the ramdisk, which means the ramdisk doesn't encroach the visible memory. Yes, via this method, we collect the physical memory that is invisible to OS.

2. Make sure that your Windows OS enables PAE feature, otherwise you will get an error message like that "Your computer does not support PAE feature." when you tick "Enable OS Invisible Physical Memory" in the "Options" tab. To enable PAE feature, see How to enable OS PAE feature .

3. Do not simultaneously use the similar software which also manage the Invisible Memory. This may cause the conflicts. You may solve this issue with IM Reservation feature.

4. If you want to enable OS hibernation function, do not set system page file (pagefile.sys) to the ramdisk which uses Invisible Memory. Otherwise BSOD may occur. However you can set it to the ramdisk using OS visible memory. Also you need to enable IM Hibernation feature.

5. In case you can't boot up the system normally after you enable the Invisible Memory Support. You can restore the settings by booting into OS Safe Mode.