The Dynamic RAM Allocation feature provides an advanced method to utilize the RAM while simulating a hard disk. If this feature is enabled, the VSuite Ramdisk only allocates minimum RAM needed for the ramdisk instead of full-scale RAM requested at the time of creation of the ramdisk. It will request RAM allocations in steps of 32MB size while current allocated RAM is not enough for the new added data. This means the software dynamically allocates RAM from system memory along with increased data, unless the amount of allocated RAM has already reached the ramdisk's size.

This feature is useful if sometimes you need to allocate as much as possible RAM for ramdisks while sometimes you need to do that for other programs. For example, you may create a ramdisk of large disk size and use it as a cache disk for downloading files from internet at some time, however at usual time you may need large amounts of RAM to run a game. Enable this feature will make you switch between these two applications conveniently.

The following figures show a detail and visual demonstration.

Let's use Windows Task Manager to see the available amount of RAM before adding a ramdisk. The available physical memory is about 3GB.

To make a comparsion, we add a ramdisk of 2000MB size WITHOUT Dynamic RAM Allocation enabled at first. The available physical memory immediately reduces to about 1GB which means 2GB RAM is allocated for the ramdisk. 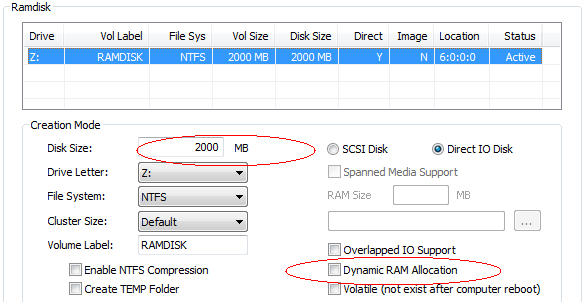 Now we remove this exist ramdisk and add a new ramdisk of the same size WITH Dynamic RAM Allocation enabled. Check the available physical memory again, and it is about 2.8GB! Only about 200MB RAM is allocated for this ramdisk of 2GB. (This 200MB RAM is used to build initial NTFS file system.) 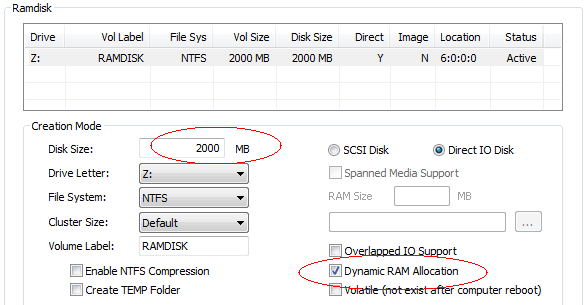 Continue the experiment, we copy about 600MB data to this ramdisk (drive Z:). Now the available physical memory is about 2.2GB which means about 600MB RAM is newly allocated for the ramdisk to hold the arrived data.

2. This feature only applies to the OS managed memory, not to the Invisible Memory.

Compact Mode provides better RAM allocation algorithm by rearranging data layout which make sure each RAM allocation unit is fully utilized before request a new one. For eg, on Windows Vista or Windows 7,if Compact Mode is not enabled, the operation of checking the ramdisk's properties (right-click the ramdisk icon in "My Computer" and select "Properties" in popped up menu) will cause almost all the claimed RAM to be allocated. However with Compact Mode, this issue would not happen.

The shortage of Compact Mode is that it costs minor performance of data access. Besides, it only supports Smart Mirror if Image File is used.